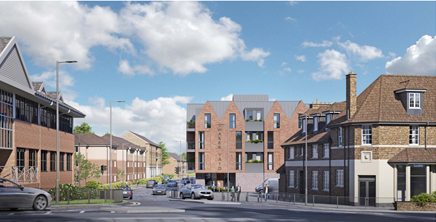 Work is well underway at the mixed-use development, Swaker’s Yard in Borehamwood, for which G F Holding is Principal Contractor.

The development includes a four storey new building, as well as the refurbishment of an existing two storey building.  This development will provide 9,500sqft of high quality, flexible workspace for small business office units, open plan co-working and a café space, as well as workshop studios.  The development will also provide nine 2-bedroom apartments, which are designed to be 10% larger than Housing Design Standards.  Each apartment will have a private balcony and access to a shared rooftop garden.

The scheme which is considered to create “a strong architectural style which is sympathetic to its surroundings”, will also improve the surrounding public realm, widen the pavement and improve the street frontage.

The site is steeped in history having housed The Crown public inn with a yard, coach house and stables during the 18th and 19th Centuries.  During the late 1800s, the yard and outer buildings were used by Charles Henry Swaker to let out horses and carriages on a job-by-job basis.  His company, which operated between 1844 and 1923, was an agent for the Midland Railway Co.  This new development has been named “Swaker’s Yard”, in honour of the Swaker family history on the site.